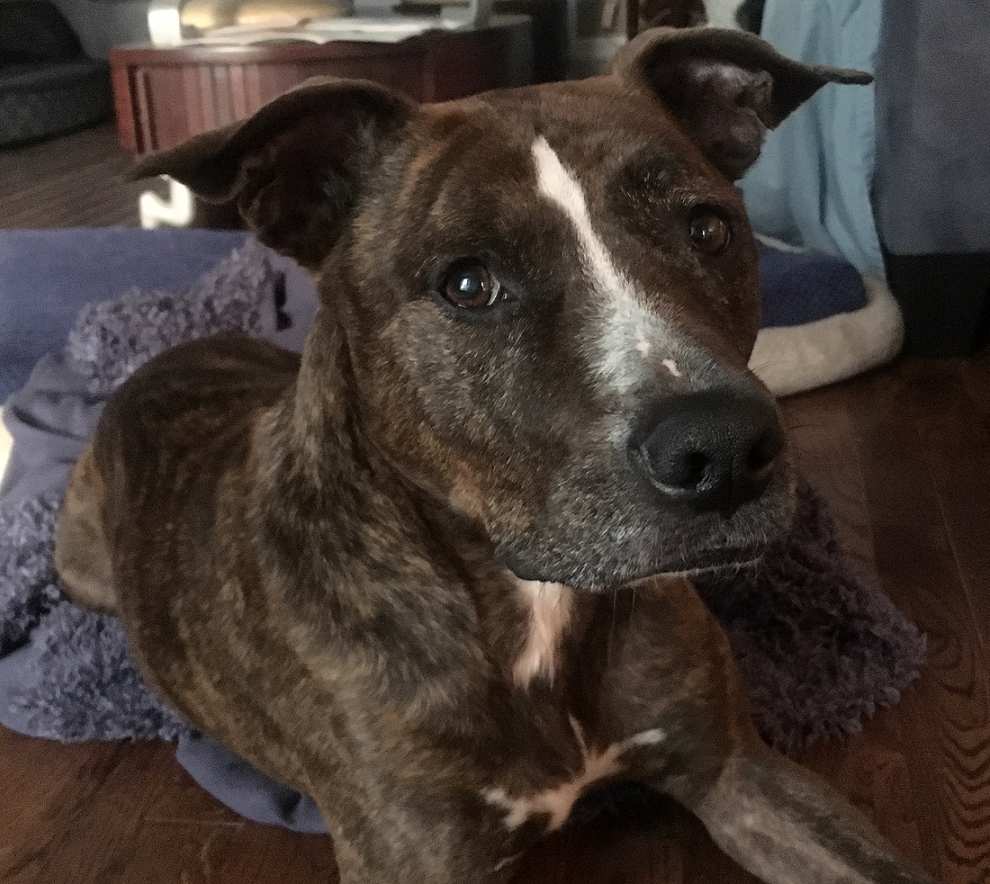 ♥ Name of Pet: Roxi
♥ Location: Fairlawn, Ohio  44333
♥ Type of Pet: Dog
♥ Breed of Pet: Staffordshire terrier / Dalmation / Boxer mix  Mix Dog
♥ Color / Coat Type: brown brindle
♥ Age of Pet: 12
♥ Size of Pet: medium
♥ Weight: 60
♥ Good with cats?: No
♥ Good with dogs?:Yes
♥ Good with small kids?:Yes
♥ Good with older kids?:
♥ Health Problems: Yes She has some arthritis in her hips/hind legs that doesn’t really affect her except for climbing stairs or jumping into the car. She does not take any medication on a regular basis but has taken Galliprant in the past. And she has no problem running around the yard.
♥ Behavior Issues: No
♥ Fixed: Yes
♥ Fully vaccinated: Yes
♥ House Broken: Yes
♥ Tattoed/Microchipped: Unknown

Roxi is a people-lover! All she wants in life is to be included in the group, be near her people, and eat. She’s calm and laid back when the people are still, and she’s peppy and excited whenever there’s an adventure to be had. She likes other dogs when we’ve gone to dog parks or doggie day care / boarding, but she’d be perfectly fine as the only dog in the house. She’s much more a people-dog than a dog-dog. She’s an all-around sweetie who’s never given anyone any trouble.

She’s never really played with toys other than a quick tug-of-war every so often. She loves all foods and treats, especially duck jerky. She’s not a big fan of vegetables but loves apples. She likes walks where she can explore new territory and meet new people and dogs. She does well on long car rides (adventure!) and has visited 17 states on road trips.

Her nickname is Miss Side-Eye because she has this ridiculous habit of looking at you out of the corner of her eye, usually if you’re eating something delicious and she hopes you’ll share. She thinks she’s being discreet, but she’s so obvious! I must’ve sent my Mom 100 pictures of her doing it because my Mom thinks it’s the funniest thing in the world.

The first 8 years of Roxi’s life were tough. I don’t have much info, but when I got her from the shelter she was sick, skinny, and had apparently been kept in confinement her whole life without proper vet care. So everything she did was a new, exciting experience.

About 6 months after I got her, we went on a 2-week, 9-state road trip. She was so excited and interested. Some days we drove as much as 8 hours, and she looked out the window the entire time. She didn’t sleep at all! I’d look back and see her sitting there, looking like a little kid, soaking in all the sights. It was adorable.

Why is Roxi Being Rehomed?

A family member is experiencing deteriorating health issues and can no longer live alone. When he moves in with someone else, we will have to shift the family dogs around because his dog doesn’t like other female dogs and has some behavior issues (due to lack of training).

The only way we could figure it out was for me to rehome Roxi and take in his dog. Roxi’s probably the easiest to rehome because she’s the youngest, smallest, and best-tempered of all our dogs, and she doesn’t have the health issues that the others have. It’s sad because I feel she’s getting short-shifted because she’s the “goodest girl”.

Roxi’s Perfect Adoptive Home Will Be:

Someone who will include her as part of the family and invite her along in activities, including lounging on the couch watching movies. She needs to be an inside-dog! She would very much enjoy a family or people who have frequent guests.

She’s always drawn to movement and voices. But she would also be perfectly fine living with just one person so that she can be the center of that person’s attention. She sometimes has trouble with stairs and jumping into the car, so someone who understands and can accommodate her limitations is important.

Contact our Fairlawn Dog rehoming team today. Text “Roxi” to (888) 833-2128 or email [email protected]. We look forward to hearing from you.

Roxi is located near the following towns and cities in Ohio.

How To Adopt Roxi

If you are interested in adopting this special Staffordshire terrier / Dalmation / Boxer mix mix Dog for adoption in Fairlawn, Ohio, please fill out our online meeting request form below. Once received and reviewed, our staff will ask the pets owner to reach out to you and arrange a meeting.

There is a $75 adoption/rehoming fee. Some supplies and veterinary records will be included.

About The Staffordshire terrier / Dalmation / Boxer mix Breed of  Dog

About the Breed of Dog

Thank you for your interest in this stunning Staffordshire terrier / Dalmation / Boxer mix mix Dog for adoption in Fairlawn.