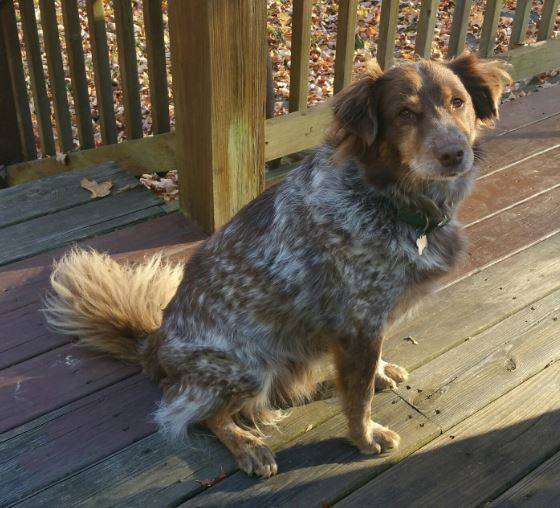 There is a $150 adoption/rehoming fee. All supplies will be included.

I am a brown and white Male australian shepherd mix Dog. I am 4 and weigh 40 lbs. I live in Paris, kentucky.

Bo is such a good boy! This 4 year old Australian Shepherd mix is looking for a loving family in or near Paris KY.

Bo is neutered, up to date on shots and very healthy. Other pets and animals make him anxious, so he is looking for a family where he can be their only pet, and the center of their world. Please offer this great dog the loving home he needs and deserves. He is willing to relocate for the right adopter.

Currently we are living on a house with 5 acres. We have one other dog, a small older female, a cat, and chickens. He spends his time inside unless we are out with him, although if he had a safe fenced in yard he is very good outside and doesn’t bark or whine to come in.

Currently it’s just me and my husband and our animals.

He loves his tennis ball! He is not super food motivated but likes most treats well enough.

Bo was living on the streets in Mexico when we took him in. I had met him a couple times and I was getting ready to get in my car with our other dog and head home when I found he had climbed into the backseat of my car. It’s a hatchback so he had to squish and squirm to get himself in there. He climbed in three times before I didn’t have the heart to get him out again and took him home with me.

Why is Bo Being Rehomed?

Bo’s Perfect Adoptive Home Will Be:

Someone who has at least a nice big secure yard. He is leash reactive and also has separation anxiety. He has learned to be home alone in two different homes, but his new family would need to be able to take the time to train him to be comfortable alone in the new house. Someone who is home a lot or has a flexible schedule or also someone who has a friend who could watch him until the training is complete. He also shouldn’t be in a home with other animals. He might be okay with another dog, however the dog would have to be female as well as calm and non-dominate. He would attack a hyper dog.

Also someone who is kind and not domineering. When he’s scared he needs to be reassured and yelling doesn’t help with him. He needs someone patient who can appreciate his sweet personality and would like a dog who likes to cuddle.

Bo’s leash reactivity is when he sees other dogs while on leash. If he meets new dogs off leash he will usually stay out of a fight unless the other dog is aggressive or very hyper. He’s really just scared of the other dogs. I’ve worked with him some and he has improved and I think with steady work he would continue to improve. However, it might be better if he lived somewhere he didn’t need to go for walks but could get his excercise just running around and playing ball.

As far as his separation anxiety goes, he is not destructive, he doesn’t defacate in the house or chew or scratch things. In our first house he would bark non-stop. It took a couple months of gradually increasing departure times from seconds, to minutes, while leaving him treat filled bones to give positive reinforcement. We also have a citronella collar to keep him from anxious barking since it gets self re-inforcing. At our second house we had him in the basement where we were living and left through the stairs up to the top of the house. He adjusted over a couple of weeks that time. He mostly now just paces and whines and you can tell he is worried as opposed to the barking. But that goes away once he’s comfortable in the new place.

He will likely never be the kind of dog that you take everywhere with you, and will not be able to be taken on trips and left in strange places. He also would not do well in a kennel. But he would do just fine with a pet sitter as he just wants company but doesn’t need a specific person.

And even though we’ve never had an issue with him and kids I think it would be better if he was not placed in a home with small children. At least old enough to not be pulling tails and things like that.

He also does mark, it’s an anxious habit from when he was living on the streets. Over time it has almost completely stopped in the house however we have a male wrap for him. We just keep that on in the house and it works great. Really easy and not a big deal at all that way.