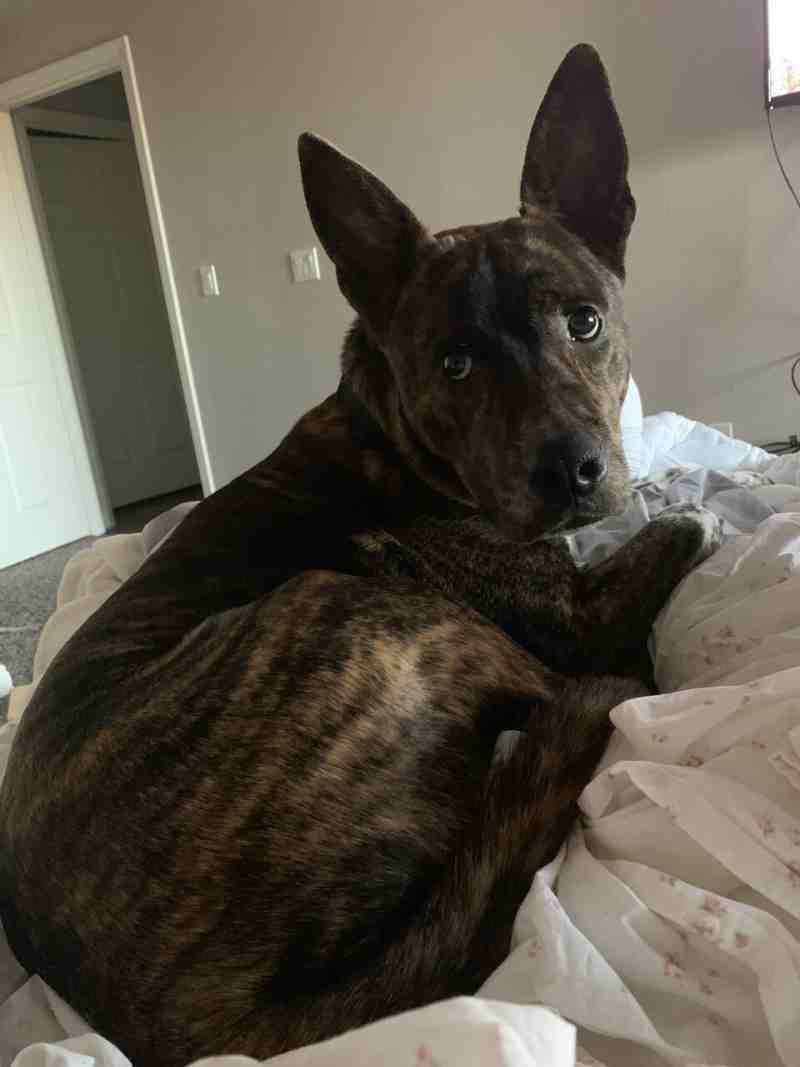 August is a male German Shepherd mix dog for adoption to a very loving home in or near Las Vegas, NV. This very special Dog is 3 years old and weighs 50 pounds. August is neutered and up to date on shots. He is very healthy and is house broken.

August is a very loving and devoted dog. He loves to play and is a cuddly and very affectionate dog. He has a very unique brindle coat with cute white paws and chest. August has big brown, expressive eyes.

August is looking for a his forever home with dog lovers who do not have any other pets. He is not a fan of cats, and this is the reason why he is seeking a new home.

August will be rehomed with all supplies and vet records. If you have room in your heart and home for this very special German Shepherd mix dog, please offer him a loving home today.

Questions about August? Contact our Las Vegas Dog rehoming team today. Text “August” to (888) 833-2128 or email [email protected] We look forward to hearing from you.

Name of Pet: August
Location: Las Vegas, NV, 89147
Type of Pet: Dog
Breed of Pet: German Shepherd Mix
Sex of Pet: Male
Age of Pet: 3
Spayed/Neutered?: Yes
Health Problems: No
Behavior Issues: No
Up To Date on Vaccinations: Yes
Gets along with cats: No
Gets along with dogs: Unknown
Good with Children?: Unknown
House Broken or Litter Trained?: Yes
Crate Trained?: Unknown
Accessories Included: I will provide his leash, collar, and his toys.

I love August’s funny run that he does when I chase him, I love his big ears, his brown eyes, his white paws, and I love when he cuddles with me.

There are cats in the home and August does not get along with them. He is happiest when it’s time to be fed, which happens twice a day. He has space to run around in the living room, down the hall, and into the bedroom and bathroom.

He loves his squeaky ball. His favorite activity is to run. His favorite thing to drink is goat’s milk and he loves to eat chicken.

He really enjoys a cube of ice straight from the freezer. August will wait by the refrigerator door and as soon as he gets an ice cube, his face lights up. He meticulously chomps on the ice cube until it melts away.

Why is August Being Rehomed?

He does not get along with the cats in the home.

August’s Perfect Adoptive Home Will Be:

How To Adopt August

If you are interested in adopting this special German Shepherd Mix Dog For private rehoming in Las Vegas NV, please fill out our online meeting request below. Once received and reviewed, our staff will ask the pets owner to reach out to you and arrange a meeting.

Questions about August? Contact our German Shepherd Dog rehoming team today. Text “August” to (888) 833-2128 or email [email protected] We look forward to hearing from you.

August is a German Shepherd Mix Dog for private adoption by owner in Las Vegas NV. This pet is located close to the following towns and cities in Nevada, Utah, Arizona and California:

Contact us about this sweet German Shepherd Mix Dog for adoption in Las Vegas NV today.