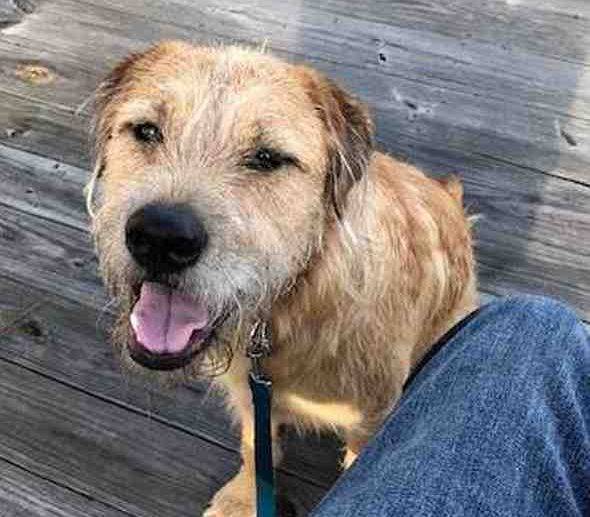 Savannah GA – Looking for a Golden Retriever puppy for adoption near you? How about an American Staffordshire Terrier pup? Cooper combines the best qualities of both popular dog breeds in one. He is a handsome, healthy, friendly, exuberant, house trained, joyful and very lovable pup of 1 year.

Cooper weighs 55 pounds, and is good with people of all ages and sizes, as well as other dogs, cats and small animals. He is being placed for adoption due to his family not having a fenced yard in order to keep him safe and sound.

He is an amazing pup looking for a special family to love and cherish him. He will be rehomed with all supplies and vet records. $150 rehoming fee. Adopt Cooper today!

Cooper is a Golden Retriever American Staffordshire Terrier mix dog for adoption to a very loving home in or near Savannah, Georgia.  This very lovable, special dog is only 1 year old and weighs 55 pounds pounds. He’s still very much a puppy in terms of his curiosity, love of play and willingness to explore or run.  He loves the water!

Cooper has no fear of strangers and is very friendly . One of his favorite things is to greet people when they come to his home.

Cooper is good with kids (not toddlers or younger – because he’s a little big to be around children who might trip or pull or hit) –  his personality is great for a family dog! He even likes animals, as he once got very worried about an injured raccoon that fell near the house.  He’s a little kid inside.

Cooper’s face may look like an older bearded dog – but he’s all puppy and lots of fun! With Cooper around, you’ll find that he makes you laugh every day.

Unfortunately his current family are worried that they can’t provide a safe enough fence to keep him where he needs to be. Their home is very close to a tidal marsh, a creek and a busy road. Without a good fence,  Cooper is a constant worry for fear that he will run off their lot and get into trouble or get hurt.

Building a suitable fence is not possible, so they would like to give Cooper a better home where he can be free to play in safety. Other dogs in the area have been hit by cars, and it has been decided that Cooper needs a safer home.

If you like the outdoors and would love to take Cooper on walks with you,you’d be his dream owner.  He is still not quite used to using his harness, so you will need to help him get used to that. He’s shown a willingness to roam in search of another dog to play with, so if you have another similar dog to be his pal,  they might keep each other company.

Cooper would do best with older children and definitely a family that has another dog. A fenced area with room for him to run would be ideal as well as someone who can train him in basic commands. He’s at that age where he needs regular exercise and somebody to follow around.  He would be a perfect family dog if you have a good place for him.  He has a lot of basic training and a good personality – he just needs a good companion who can be firm and patient as he leaves his puppy year.

Contact our Savannah Dog rehoming team today.
Text “Cooper” to (888) 833-2128 or email Cooper@Dog-lover.us. We look forward to hearing from you.

1. He’s a puppy but looks like an old man.
2. He loves the water.
3. He’s a greeter and likes to be acknowledge.
4. He’s great with other animals.
5. He’s completely house-trained.

We live on a large lot on a tidal creek, so the prospect of fencing has been difficult as he could easily go around and through the marsh. He’s been raised with my 3 older children and is constantly looking for another dog to run and play with.

Chew bones, knotted ropes, and running and playing in the water and marsh.

As Cooper rarely barks, the last time he did was because a baby racoon had fallen from one of our trees and broke its leg. Cooper kept his distance and was barking to alert me about the small animal. He LOVES other animals.

Why is Cooper Being Rehomed?

Has not yet become used to a harness and seems to prefer his collar. He is a very friendly dog, but will roam in search of another dog to play with. He also needs a lot of running and exercise and while we have a large yard, it is not fenced and I worry over him being hit by a car. He could really benefit from someone who knows how to train him in basic commands.

Because a fence is not a good prospect for us due to the marsh and tidal creek, I fear that he can be hit by a car. I have not been able to make him understand his physical boundaries. While the speed limit it technically 25 mph on our road, people still drive faster and a lot of dogs have been hit.

Cooper’s Perfect Adoptive Home Will Be:

I think Cooper would do best with older children and definitely a family that has another dog. A fenced area with room for him to run would be ideal as well as someone who can train him in basic commands.

How To Adopt Cooper the Golden Retriever Mix

If you are interested in adopting this special American Staffordshire Terrier Golden Retriever mix dog for private rehoming in Savannah GA, please fill out our online meeting request below. Once received and reviewed, our staff will ask the pets owner to reach out to you and arrange a meeting.

Contact our Savannah Dog rehoming team today.
Text “Cooper” to (888) 833-2128 or email Cooper@Dog-lover.us. We look forward to hearing from you.

Cooper is a Mixed Staffordshire and Golden Retriever Dog for private adoption by owner in Savannah GA. This pet is located close to the following towns and cities in Georgia: