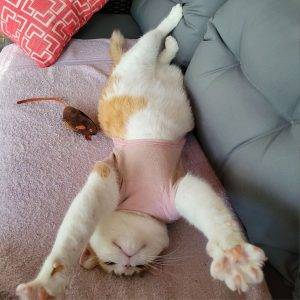 Looking for an Orange Tabby Cat for adoption in Memphis, Tennessee and area? Ballito would love to be considered for the position of cherished family pet.

Just 3 years old and weighing an impressive 15 pounds, Ballito is looking for a loving forever home anywhere within a reasonable distance of Memphis. 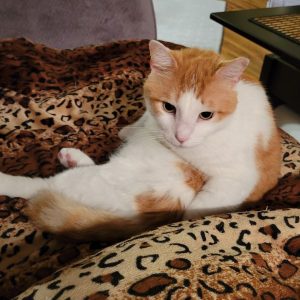 From his cute (and very boop-able) little pink nose to the tip of his tangerine tabby tail, Ballito is an enchanting cat with so much love and laughter to add to his new home.

This handsome cat has affectionately earned the nickname “Bangs” due to the colorful markings on his forehead and has the most stunning eyes. He is intelligent and almost dog like at times, and will make an amazing companion to his forever family!

Ballito has had all his vet stuff done up to date – he is fixed and fully vaccinated. Ballito is litter-box trained, too. 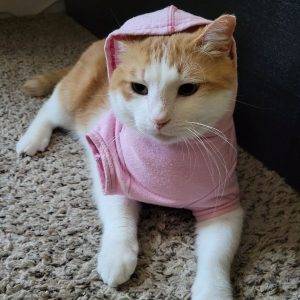 Ballito is looking for a very loving new home where he can be the only pet. Being around all the other cats in his current home is causing him a lot of stress, which is not good for his health and mental well-being. Ballito is better suited to being the cherished only cat in a family with older, respectful children or adults only.

Ballito is a friendly and affectionate cat with so much love to offer his new family. Won’t you offer him his forever home today?

How To Adopt Ballito

Please complete our online meeting request form below. Once received, our Memphis Cat Rehoming team will make arrangements for you to meet Ballito and the owners. Adopt Ballito today!

There is a $35.00 adoption processing fee. Supplies, accessories, and veterinary records will be included. 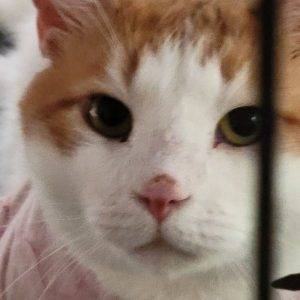 ♥ Name of Pet: Ballito
♥ Location: Memphis, TN, 38115
♥ Type of Pet: Cat
♥ Breed of Pet: Orange Tabby cat with white
♥ Color / Coat Type: Orange and white short hair
♥ Age of Pet: 3 years
♥ Size of Pet: 15 pounds
♥ Health Problems: No
♥ Behavior Issues: No
♥ Gets along with: Older Children, New People
♥ Pet is: Fixed, Fully Vaccinated, Litter box trained
♥ Food: Other
He eats pretty much anything such as Friskies, Fancy Feast, Blue Buffalo, Purina Pro, etc. to Fromm’s. Routinely, to keep him calm and not triggered by anything, I give him CBD oil, calming treats (Thunderwunders or Composure) that seem to work best with him.

Ballito is extremely playful. He has energy like a kitten and loves being talked to, watches TV, loves hanging out together. However, at night, usually starting at 10PM he likes to have his final meal and sleep till about 10am in his sleeping crate. Ballito is one of the smartest cats I have known. He behaves like a cat/dog mix. I have been able to teach him a few things that he immediately understands like running from one crate to another by cheering him on (so I don’t have to carry him running into the risk of one of the 2 male cats coming into the area), calling him by his name and he comes running, etc. He seems to understand human language well and prefers baby talks and full conversations as he is also a talker.

Ballito loves people, he is not shy, and was around sleeping on a chair next to handymen hammering and banging around during construction of my office. He is also very protective and will feed off one’s energy (if I wanted a dog out of my yard he would chase him and if I wanted to pet a dog, he would listen to my commands and positive energy and stay away but watching carefully and ready to defend me if necessary). He used to be injured and emaciated when I rescued him 2 years ago and still has a slight limp but he is fully healed from that and doesn’t affect him in any way. He is as active as a kitten still!

Ballito needs to be an only cat, since he becomes overstimulated when stressed.

Why is Ballito Being Rehomed?

I have two senior cats and rescued Ballito from neighbors that threw him out of the house leaving him fending for himself.  Because he is aggressive toward 2 of my other male cats, I have to keep him crated for most of the day when not outdoors in a chicken coop. He gets very anxious being crated for so long unless I get another cat to play with him. When it gets colder, I can no longer keep him in the chicken coop and he would need to stay in a 3 tier crate or his sleeping crate all day long. It is hard to keep him separated from my two male cats. That wouldn’t be a life for him.

I would prefer someone who is experienced with cat behavioral problems due to his history.  He still has a few “bad teenager” behaviors that someone needs to be able to teach him not to do and how to behave properly at all times. He is an amazing cat that loves attention so if someone is around often and dotes on him, he will be the best buddy (with some dog behavior) that one can wish for!

Ballito is located in Memphis, Tennessee, close to the following towns and cities:

Thank you for your interest in this deserving Orange Tabby cat with white for adoption in Memphis TN.