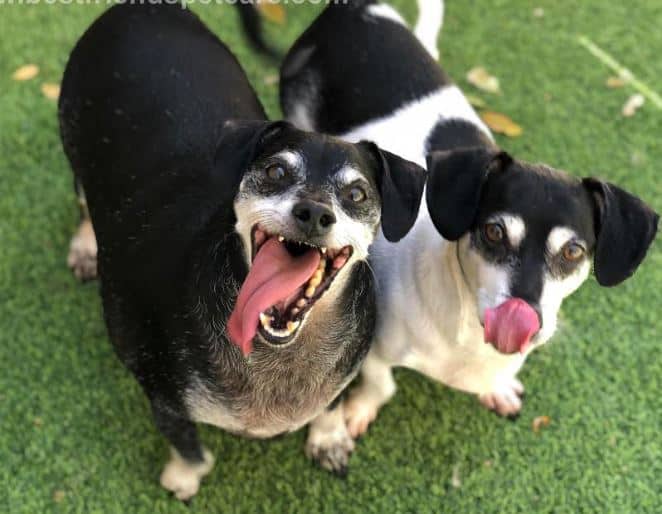 Boots and Oliver are a bonded pair of male Dachshund mix dogs for adoption to a very loving home in or near Sacramento, CA. These very special dogs are 8 years old and weigh: 15 Oliver and 20 Boots pounds.

They are good with other dogs and respectful children. Both dogs have been neutered, fully vaccinated and are healthy. They are sweet, funny, smart, kooky adorable little pudgy clowns and are very good at putting a smile on your face and joy in your heart.

Boots and Oliver are the cherished companions of a senior lady who has spoiled them rotten over the past several years. (Too many treats, which accounts for their chubbiness). Sadly, she has had to go into care due to declining memory, and the dogs are looking for a loving new home.

These are dogs that would fit in well into almost any home. They are lazy little guys who love to keep you company, but also enjoy each other’s company.  They can be playful with each other, and love to frolick together in the back yard. They are very social with other dogs.

Since their owner’s health issues began, she has not been able to give them structure, and as a result will need some reminding where their potty habits are concerned. An owner who will take them outdoors regularly for the first little while will be rewarded with house-trained dogs.

If you are looking for a pair of canine clowns in the form of two Dachshund mix brothers to adopt, please offer Boots and Oliver their forever home today.

There is a $100 adoption/rehoming fee to adopt both dogs together as a bonded pair. Supplies and veterinary records will be included.

Questions about Boots and Oliver? Contact our Sacramento Dog rehoming team today. Text “BootsOliver” to (888) 833-2128 or email [email protected]. We look forward to hearing from you.

The dachshund is a short-legged, long-bodied, hound-type dog breed. The standard size dachshund was developed to scent, chase, and flush out badgers and other burrow-dwelling animals, while the miniature dachshund was bred to hunt smaller prey such as rabbits. Wikipedia

Sex of Pet: Male
Age of Pet: 8
Spayed/Neutered?: Yes
Health Problems: Allergies to grain foods. If on grain free food they are fine.
Behavior Issues: No
Up To Date on Vaccinations: Yes
Gets along with cats: Unknown
Gets along with dogs: Yes
Good with Children?: Yes
House Broken or Litter Trained?: Yes
Crate Trained?: No
Accessories Included: They each have a crate, they will have leashes and harnesses. They beds that they have are new, but they have been in the board and care for about 2 months. We would be willing to advance monies to assist in getting them settled.

They are active
They are friendly and curious
They love to run and play with each other and are willing to let others play with them.
They have the ability to have quiet time.
They are loyal

The home they came from was large and inviting. There was a fenced patio in the back where they could have outdoor time and a fenced area in the front where they could ‘talk’ to other dogs walking by while their parent sat in a swing and talked to neighbors. The furniture was old so no one stopped them from sitting on it when their parent watched television.

The family they came from was with an elderly lady who lived alone. She had young people coming to visit on occasion and the dogs welcomed them once they were known to the dogs. They would bark at passers by, but once you were known to them they simply yapped a hello until they were acknowledge.

Their favorite toys were really their parent. While they LOVE cheese and any food their parent was eating, these foods created allergies so should not be shared with them. They love to sit in their front yard and watch/bark at passers by.

When Oliver first came to live with his parent, he was by himself. Boots came later as no one could be found to home him. When he got to the house and saw Oliver, they ran to each other like crazy and couldn’t get enough play with each other.

Why is Boots and Oliver Being Rehomed?

Their parent has Alzheimer’s and had to go into memory care. The facility does not allow dogs in memory care and their parent actually has not been able to care for the dogs for a while. I and my husband were able to take them to the doctor for the first time in a couple of years to bring their shots up to date and find out why they had trouble with their skin. It was discovered that the foods they were eating caused the allergies. They are in good health now and have lost a bit of their weight. I have promised my mom that we would find a good home for them and do our very best to keep them together.

Boots and Oliver’s Perfect Adoptive Home Will Be:

I think that a mature person or couple would be best. A home where there is some outside space where they can run around independently. They would also do well to go on walks, not very long ones, with their parents. Also, they love sleeping with their parents. Definitely people who would want to talk to them as though they are talking to a small child.

While my mother is verbally willing to rehome the dogs, she often forgets that she will not have them with her. It would probably upset her to see them and then have them leave. The dogs have adjusted to not being with her very well and seem to be happy with anyone willing to pet and chat with them.

How To Adopt Boots and Oliver

If you are interested in adopting this special Dachshund Mix Dog For private rehoming in Sacramento CA, please fill out our online meeting request below. Once received and reviewed, our staff will ask the pets owner to reach out to you and arrange a meeting.

Questions about Boots and Oliver? Contact our Dachshund dog rehoming team today. Text “BootsOliver” to (888) 833-2128 or email [email protected]. We look forward to hearing from you.

Boots and Oliver are a bonded pair of Dachshund Mix Dogs for private adoption by owner in Sacramento CA. They are located close to the following towns and cities in CA: