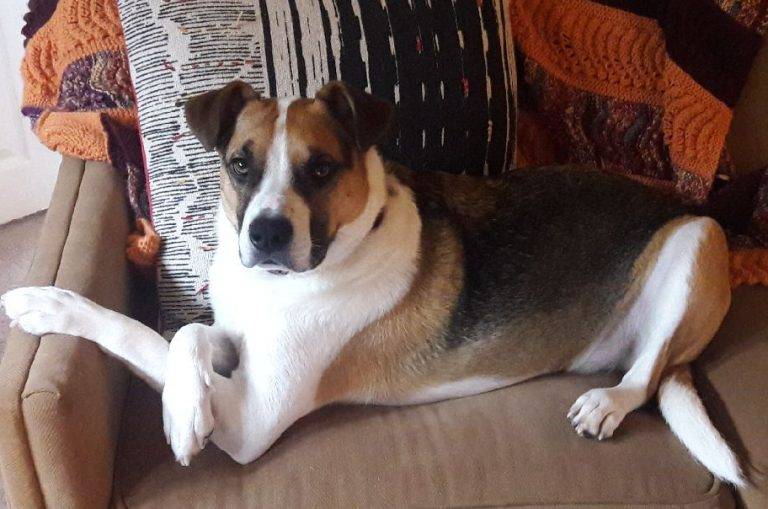 Reggie is a Male Beagle German Shepherd Boxer Mix Dog for adoption to a very loving home in or near SEATTLE, WA. This very special Dog is 3 years old and weighs 50 lbs pounds.

Reggie is very good with other dogs. He has not been around cats. He is fixed, up to date on shots, micro-chipped and house broken. He is in very good health, and is a devoted and affectionate companion in need of the perfect home.

Due to some abuse that he experienced in his past, Reggie has some anxiety around children and strangers. He needs a quiet home with just one or two adult dog lovers who can give him their time, attention and companionship. In a home where he feels safe and secure, you won’t find a more devoted, affectionate, or well behaved dog.

If you have been looking for a very special companion, and you have the right environment for Reggie, please request to meet him. Reggie can’t wait to show you the true meaning of unconditional love.

Questions about Reggie? Contact our SEATTLE Dog rehoming team today. Text “Reggie” to (888) 833-2128 or email Reggie@Dog-lover.us. We look forward to hearing from you.

Name of Pet: Reggie
Location: SEATTLE, WA, 98125
Type of Pet: Dog
Breed of Pet: Beagle German Shepherd Boxer mix
Sex of Pet: Male
Age of Pet: 3
Spayed/Neutered?: Yes
Health Problems: No
Behavior Issues: Yes Fear of strangers. Needs slow introductions to new people. If they approach quickly or reach out he will nip them. Has some fear issues of new situations but once he feels comfortable he gets over it. Can have fear issues with some sounds like fire alarms. Definitely feels more confident and secure in a pack (dogs and/or humans). Definitely wasn’t well-socialized as a puppy, experienced abuse and neglect at some point in his life.
Up To Date on Vaccinations: Yes
Gets along with cats: Unknown
Gets along with dogs: Yes
Good with Children?: No
House Broken or Litter Trained?: Yes
Crate Trained?: Yes
Accessories Included: Toys, crate, backpack, brushes, nail clippers, bed.

Loves to snuggle. Will lay his head against your chest and wrap a paw across you in an embrace.
Does a little “woo-woo-woo” when he’s excited about going somewhere or someone he loves comes over.
He’ll lay down with his back legs “frog style” and his front legs crossed over one another.
Obsessed with corgis and Toto-like terriers- goes ga-ga over them even if they say mean things to him.
Very sweet face with beautiful eyes.

Quiet, one adult who works full time.
He would do better with a couple who can spend more time with him and help him overcome his fears. Ideally there would be another dog in the home.

Single adult.
Again, he would do better with more than one person in the home and another dog as a companion. NO KIDS.

Sniffing and exploring. Chewing on bones. Playing with doggie “puzzles.” Riding in the car. Running on the beach. Hiking. Camping.

He saved me and my sister from a giant flying bug while we were camping. He head-butted it. I’ve never seen a dog head-but something!

He’ll only wade out into water up to his belly, but he tries to smell things underwater which is very cute.

Why is Reggie Being Rehomed?

I am a single person who works full time and do not have the time or money to continue his rehabilitation work for his fear of strangers. My friends and family have kids and he cannot be around them at all. This means I have to leave him behind or shut him up when I socialize with them, which is often. I also rent and I don’t have a private yard. The spaces he has to run around are shared and he’s not 100% trustworthy around strangers.

Reggie’s Perfect Adoptive Home Will Be:

An adult-only home with someone who can dedicate more time and resources for rehabilitating him. Someone who has a private, fenced yard and owns their own home. He would love to have another dog around- he forms close bonds and looks up to other dogs.

How To Adopt Reggie

If you are interested in adopting this special Beagle German Shepherd Boxer Mix Dog For private rehoming in SEATTLE WA, please fill out our online meeting request below. Once received and reviewed, our staff will ask the pets owner to reach out to you and arrange a meeting.

Reggie is a Beagle German Shepherd Boxer Mix Dog for private adoption by owner in SEATTLE WA. This pet is located close to the following towns and cities in WA: