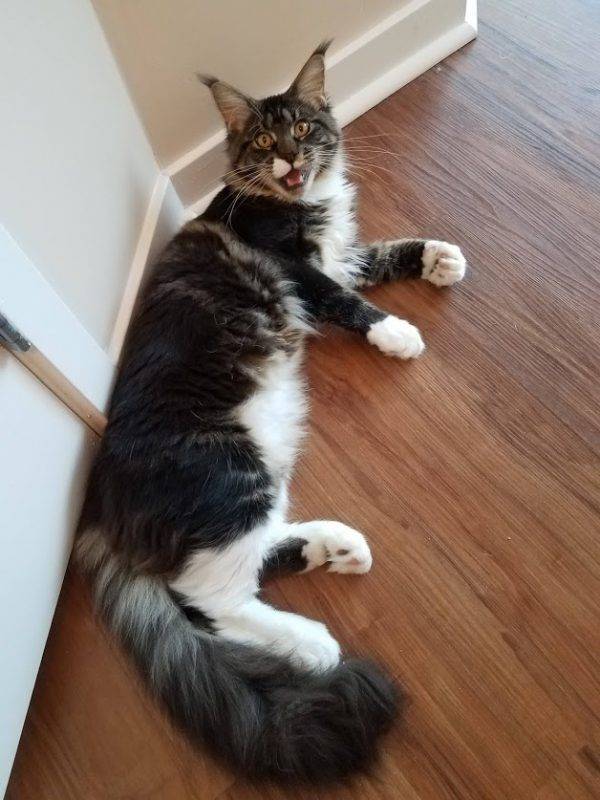 Looking for a gorgeous Maine Coon cat for adoption in San Diego CA? Marquise is looking for you! This 18 pound bundle of purrs is just 1.6 years old and has been neutered, fully vaccinated, micro-chipped and litter trained.

Marquise is in excellent health and is good with other pets and children. He has an incredible personality – affectionate, friendly and very sociable. He will be rehomed with all supplies and veterinary records. Adopt Marquise the Maine Coon cat today.

All About Marquise the Maine Coon

Marquise very much lives up to his name – he is giant, fluffy, fabulous, and pretty much larger than life in all respects. He can be loud and opinionated. He likes to be the center of attention. He must know what you’re doing at all times, and loves to be included in all family activities. He is very affectionate and will bump your feet with his head the moment you come within his affection space. He is very social with most people. If He’s a little shy at first, he warms up almost immediately. Marquise is very intelligent – he knows how to open doors, responds to words in two languages, and is very quick to learn new things.

Marquise can bite when he is over stimulated or grumpy (and you pet him or keep petting him), or when he is being groomed. He gets very upset when his claws are being trimmed and needs to have travel sedatives to be groomed fully. He also sometimes plays rough (lets claws out). He isn’t aggressive, doesn’t attack people or scratch/bite unless he is annoyed or fees threatened, so these behaviors aren’t necessarily problematic, but because he’s such a large cat you have to pay attention. He is also extremely loud and can yowl/scream at certain times of day when he is “hunting” or playing. No attempt to teach him to be quieter have worked and this has caused complaints from neighbors

Loves anything with feathers
Not so big on catnip – he does smell it but somehow he never goes crazy over it like other cats
Loves to play with water! Will jump in the shower with you
Loves bouncy balls that crunch or make noise
Has a thing for grocery containers (like the kinds strawberries come in!) has to paw them, chase them around
Loves boxes and plastic bags, the crunchier the better
Loves high places, will go out of his way to climb someplace high
Loves chicken, rabbit, turkey,
*HATES* fish of any kind (crazy, right?!) he won’t eat anything fish flavored – not even treats!
Doesn’t like beef or meat flavored foods
He has a thing for pie crusts (there’s a video of him having a go at a cherry pie during thanksgiving!)

Marquise is the first cat I’ve ever met that hates fish! He literally would rather not eat anything than eat fish, raw or in cat food of any kind. At holidays I used to bake whole fishes for dinner and he would sit next to the tray, looking disgusted, and not even look at the fresh fish right next to him. Curiously, he likes cherry pie! Last Thanksgiving I baked a cherry pie and sat it on the counter to cool. While i turned away to get some whipped cream for decoration, Marquise helped himself to the beautiful crust and even when I politely asked him to leave the pie alone he looked at me and kept chewing 🙂

Why is Marquise Being Rehomed?

Marquise has a hyper social personality and requires so much more attention than I am able to give him. Also, he has never been happy in urban environment (high rise condo, glass walls, hardwood floors). He came from a large semi-rural household where he got to roam around in a large house and always be around other people and pets. He thrives on that – noise, people, attention, things happening all the time! My life has changed very drastically since I got him, and after covid19 crisis I’m having to downsize even more and will be traveling for prolonged periods of time. He already felt confined and lonely by himself when I worked long hours away from the home and now he is even more unhappy. I’ve had cats all my life and all of them were more than happy to be on their own, but this kitty is different. Marquise has a tendency to meow/yowl extremely loudly, all the time, which has caused constant problems with neighbors. He is lonely and starved for attention, I can tell, and as much as I adore him it’s not fair for him to have things stay as they are. I am also constantly stressed and feel guilty about him crying when I’m not there and for leaving the house, which is not good for my health either.

Marquise’s Perfect Adoptive Home Will Be:

I think Marquise needs to be part of a family, where someone is almost always home. It can be a single person who works from home, for instance, or a larger family where different people are home at different times of the day. What clearly doesn’t work for him is single professionals who are away from the house for prolonged periods of time. He craves human contact and attention and he’s best with people who love that noisy home life. If a family is very quiet he will drive them crazy, as he is extremely loud. Ideally he should be in a house rather than an apartment, but I think being social is more important for him than being in a larger space. Having said that, he is a very large cat and he needs space to run around, so i can’t imagine him being very happy in a studio for instance.

Contact our San Diego Cat rehoming team today. Text “Marquise” to (888) 833-2128 or email [email protected]. We look forward to hearing from you.

Marquise is located near the following towns and cities in CA.

How To Adopt Marquise

If you are interested in adopting this special Maine Coon mix Cat for adoption in San Diego, CA, please fill out our online meeting request form below. Once received and reviewed, our staff will ask the pets owner to reach out to you and arrange a meeting.

Questions about Marquise? Contact our Maine Coon rehoming team today. Text “Marquise” to (888) 833-2128 or email [email protected]. We look forward to hearing from you.

About The Maine Coon Breed of  Cat

The Maine Coon is the largest domesticated cat breed. It has a distinctive physical appearance and valuable hunting skills. It is one of the oldest natural breeds in North America, specifically native to the US state of Maine, where it is the official state cat. Wikipedia

Thank you for your interest in this stunning Maine Coon Cat for adoption in San Diego.